STM Studio helps debug and diagnose STM32 applications while they are running by reading and displaying their variables in real-time.

Running on a PC, STM Studio interfaces with STM32 MCUs via the standard ST-LINK development tools.

STM Studio is a non-intrusive tool, preserving the real-time behavior of applications.

Different graphic views are available to match the needs of debugging and diagnosis or to demonstrate application behavior. 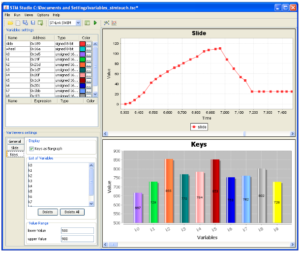 Here there is a very nice STMStudio Tutorial (by: Gidi M.)